Are you familiar with Godwin's Law? It states that, "as an online discussion grows longer, the probability of a comparison involving Nazis or Hitler approaches 100%". One of this law's corollaries takes it a bit further and says that as soon this happens, the conversation is pretty much over, and the person who brought up said Nazis / Hitler has officially lost the argument.
I'd like to propose something similar for the field that I work in, "as a marketing discussion grows longer, the probability of someone bringing up Apple approaches 100%". And I would like to add to this a sub-law which stipulates that the second this happens, everyone is free to leave the meeting, and the person who said it gets a mandatory day off to find some more original examples.
This is not to say that the lovely and talented folks at Apple haven't come up with some brilliant ideas over the years (big fan). But like all humans, they've also had some not-so-great ones, and the fact that it comes from Apple doesn't make it canon for every situation / company / brand / campaign.
Also, I'd like to add one more clause, stating that extra demerit points will be assigned in those cases in which the person giving the example says it in that hindsight-is-twenty-twenty smug tone as if they were the ones who gave the genius idea to Apple in the first place, "You know, the reason Apple made the iPod headphones white was blah, blah, blah".
You don't know. You weren't there ... In the room ... When the decision was made. Money down that if it had been the Zune with white headphones, that same person would be all, "You know the reason that thing didn't move any units, it was those damn white headphones".
At this point, I propose we make the law official with this quote from High Fidelity, "Oh, that's not obvious enough Rob. How about the Beatles? Or fucking ... fucking Beethoven? Side one, track one of the Fifth Symphony ... How can someone with no interest in music own a record store?" (Thank you Jack Black, and thank you IMDB.)
1 comment:

Flip It And Make It Better 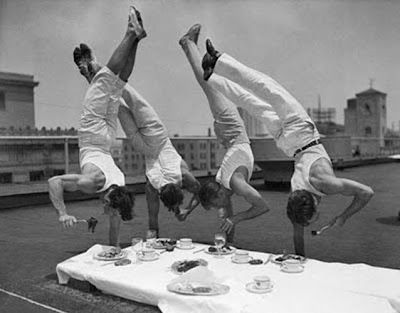 I'd like to share with you three examples of the Internet shaking up established ways of doing things, and in the process, making them even better. And as coincidence might have it, I came across all three through podcasts. (As for the photo above, while it's up for debate whether a hand-stand tea party is actually an improvement on a classic, there's no arguing that it cuts down on unwanted footsy-playing.)
Let's start with CBC's Spark podcast, and Nora Young's lovely voice telling me about new technology every week. There was a story a while back about two chemistry teachers who completely reversed the lecture/homework equation by recording their lessons as podcasts and get their students to listen to them at home. Then, they use class time to help their students in-person with what traditionally would be "homework". So simple and so brilliant -- no extra time is expected from the students, but a genius flip from the typical model of having students passively taking in information in a class, and then struggling on their own at home with the written work.
Next, let's move on to the Slate Culture Gabfest where one of the topics was Andrew Wylie, a literary agent with some impressive clients -- Saul Bellow, John Updike, and Philip Roth -- who was launching a new venture to re-release their work as e-books. Now, this isn't actually a story of the Internet flipping this around, but wouldn't it be a much more efficient approach to publishing if it was? In the case of Mr. Wylie, his clients are all very established authors who have built their careers on words printed on paper, and now he is looking at taking them digital. What if, instead, all new books came out as e-books first? It would certainly minimize the risk that publishers have to take on unproven authors, not having to worry about overprinting and seeing them end up in the dreaded discount pile. It would also be a much more environmentally-friendly option, with so many less books printed, packaged, and shipped each year. And once some of these new books actually made it to "classics" status, as many of Andrew Wylie's clients' have, that's when you'd actually have a reason to print them in special-edition form for those who wanted a physical keepsake. This has already started happening organically in the music industry -- most content is initially distributed digitally, and to the devoted fans go the limited edition albums and box-sets. Worth a try, no? If nothing else, the trees will thank us ;-)
Finally, on to Dan Savage and the Savage Love podcast. I've loved listening to radio advice call-in shows for years, but this podcast takes it to another level, and fixes all the little things that don't work on the radio. Basically, the format is that people call in and leave their questions as voicemails, and once a week, Dan chooses a handful of the most interesting ones and records his answers on the podcast. In some cases, where he has any follow-up questions, he'll call the person back on the air, and then the answer works very much like a traditional call-in show. The big difference here over the classic format is that the podcast isn't governed by the same standards as traditional radio, so Dan's free to give the kind of euphemism-free sex and relationship advice that people want to hear.
And speaking of Dan Savage, I have to mention the It Gets Better Project, which is another great example of the Internet overturning an old equation. Dan says he wanted a way of telling bullied gay and lesbian teens that while things were difficult at the time, they did eventually get better. The problem was that, in a lot of these communities, he'd never be invited to speak in front of a school. So, rather than going to them, he posted a video on YouTube and asked them to come to him. Then, over 10,000 other videos got posted with the same "it gets better message", and now Dan gets messages from teenagers who, in some cases, watch these videos on their phones under the covers late at night to help them get through the tough times.
1 comment: 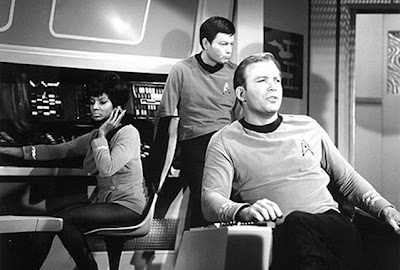 This week's Chrysler Twitter hiccup brought up something that's been rolling around in my head for a while. As brands try to find their place in social media, there are two common approaches.
Some outsource everything to a third party; but if you understand social media's full potential and you're genuinely interested in engaging your customers, then you'll probably agree this is not the best option. It's like throwing a dinner party and asking the caterer to host while you go out to the movies.
Others bring it in-house, but in most cases these are junior-level roles. Which was fine a few years ago, but as these channels begin to gain bigger and bigger reach, the stakes keep getting higher. Consider the fact that most traditional forms of marketing go through many levels of approval before reaching the public, and most tweets go through exactly one ... and things don't always end well.
That's why I think there's an opportunity for a new role -- a kind of social media captain (in honour of James T himself). Someone with a rare mix of skills: part marketing director, publicist, ad copywriter, brand evangelist, diplomat, and a great improviser. I picture them sitting in the middle of a room, working closely with a team of community coordinators, all managing different social channels. They have a morning scrum to make sure everyone's on the same page regarding current marketing objectives and programs. Throughout the day, the coordinators are able to handle most interactions on their own, but when they come across potential landmines, or opportunities to reinforce the brand story (or in a lot of cases, both), they have the option to call on the "captain" to quickly craft the right response.
Maybe this isn't the right answer, but it feels like a good approach to staying engaged with the growing volume of social media conversations in a timely manner, while minimizing the frantic next-day backpedaling.
No comments: