This completely changed the face of advertising fifty years ago. 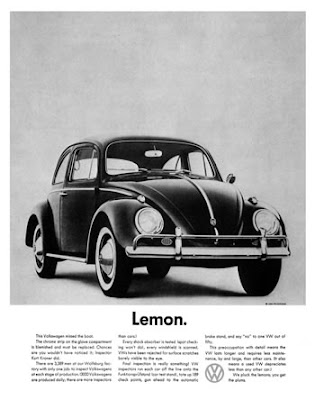 It's one of the brilliant VW ads that came out of DDB in the early 60s. It set a new tone for engaging your audience and is credited with launching the "creative revolution" (if no one has ever made a Che Guevara-style poster of Bill Bernbach, maybe it's time). And a big reason why they worked so well was that they broke away from the over-polished ads of the 50s -- the ones that were lying at worst, exaggerating at best, and just generally painting a picture of everyday life that wasn't very realistic -- and chose to be straightforward and genuine instead (while being wittily written and skillfully art directed, of course).

For decades since, people in the industry have dissected the greatness of these campaigns while searching for that new idea that would usher in the next revolution. I don't know if it's exactly the "Lemon" ad of our time, but I'd like to submit this for your consideration:

It's a series of videos called "Will It Blend?" from Blendtec (a maker of food blenders) in which Tom Dickson, the company's founder, uses his product to pulverize everything from iPhones to two-by-fours in a matter of seconds. And maybe this isn't exactly what the future of the ad industry is going to look like, but it definitely feels like a huge step in the right direction. Just as the VW work was a breath of fresh air from the polished fantasies that came before it, the "Will It Blend?" videos are a huge improvement from the 30-second failed-SNL-sketch-ideas that account for the majority of today's output.

As I understand it, the Blendtec work was done in-house, on a small budget -- and it obviously shows. But in the day of people consuming more and more video content through YouTube and posting intimate, unpolished details of their lives through blogs, Facebook, and Twitter, I don't think anyone really cares. Instead of hiring a celebrity chef or actor for a 30-second commercial that would cost a ton of money to produce and a whole lot more to get on air; these guys created a video that's three times as long, and put a face to the company that is more knowledgeable and genuinely excited about the product than anyone they could have ever cast. And, if I happen to like what they did with the iPhone, I can watch all the other videos they've produced, check out the microsite, or go straight to their website to buy the blender this second -- after all, if it can handle a bucket of golf balls, I'm sure it will do just fine with some ice cubes. Done.

Like I said, this is definitely not the pinnacle yet of what's possible in this landscape of new media opportunities and new audience expectations. However, there's something really engaging about it and I'd love to see where it goes in the next twelve months.
No comments: