Love Letter to the Web: The Sartorialist

This is one of those "things I love about the web" posts. Scott Schuman is a guy who grew up in Indiana and moved to New York to work in the fashion industry. He ran a showroom for a while, but when he and his wife had kids, he decided to stay home in order to raise them. That's when his fashion career took off.

A self-taught photographer who'd never really taken pictures until his daughters were born, he started taking snapshots around NYC of people whose style caught his eye. About a year and a half ago, he created a blog on Blogger and began putting up these photographs along with quick commentaries on what he liked about each one. Well, the site caught on and recently reached a million monthly page views, with certain entries easily garnering more than a hundred comments. 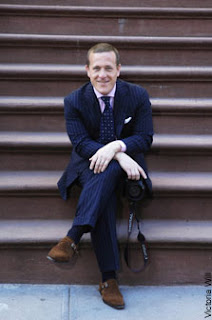 This certainly hasn't gone unnoticed and so, a few months ago, Scott received his own Sartorialist column in GQ, was sent to Europe by Conde Nast's Style.com to supplement their fashion week coverage, and the editor of French Vogue is calling him to discuss projects :-)

I love this story. Here's a guy who pursued a passion to do something that he wasn't being paid for, and thanks to the web, has built a devoted audience of millions. Which, in turn, has turned into a paying job, doing what he loves. His blog, in essence, turned out to be a living, breathing, year-long job resume. I love it!

Here's a recent article about Mr. Schuman from the New York Post.